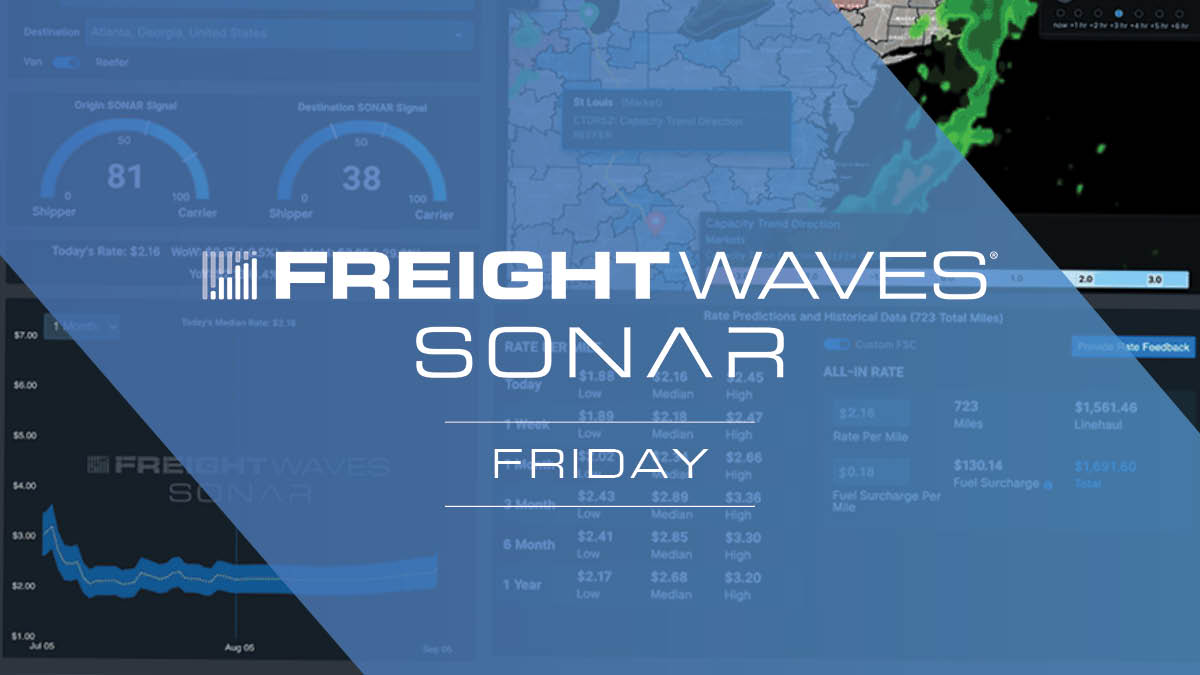 The highlights from Friday’s SONAR reports are below. For more information on SONAR — the fastest freight-forecasting platform in the industry — or to request a demo, click here. Also, be sure to check out the latest SONAR update, TRAC — the freshest spot rate data in the industry.

Truckload volumes leaving Elizabeth, New Jersey, are still trending upward after a boost in imports last week, but this week imported volumes to the Port of New York and New Jersey are down. The truckload market just hasn’t felt it yet.

Outbound truckload demand from Elizabeth, New Jersey, fell 10.4% in the first half of October, but the seven-day moving average for imports cleared through customs at the port started to pick up steam Oct. 20, rising 12% between that time and Oct. 22. However, on Sunday imports began to slide, falling 27.7% by Wednesday.

The Outbound Tender Volume Index for Elizabeth is still feeling the boom of imports that occurred last week, evident by the index rising more than 34 points, or 12.5%, since Sunday. The market may be blowing up leading into the weekend, but it will likely be next week when the drop in imports is felt in the surface transportation industry.

Rejection rates are down this week despite the rise in volume. The Outbound Tender Reject Index has decreased 88 basis points to 4.6%, indicating that carriers are settling into their contracted tenders.

Outbound demand in Detroit is dropping like a rock heading into the weekend after almost a month of stagnation.

Detroit was seeing record volumes over the summer but seems to have reached its peak. Truckload volumes leaving the market have seen little change this month, decreasing only 2.2% from Oct. 1 to Tuesday but are now taking a steep drop. The Outbound Tender Volume Index fell more than 46 points, or 17.7%, since Tuesday and is still pointed in a downward trajectory.

Inbound tender volumes are following the same trend, trickling down only 3.3% from Oct.1 to Tuesday before taking a major drop this week. The Inbound Tender Volume Index plunged more than 53 points, or 18.3%, since Tuesday.

The significant decline in both inbound and outbound volumes drove rejection rates down to their lowest levels on record since 2018. The Outbound Tender Reject Index was floating above 5% during the summer when Detroit was seeing record levels of outbound volume but is now down 266 bps since Oct. 10 to 1.3%.

NTI as a point of reference

The National Truckload Index is a daily look at how spot rates in specific lanes hold up in comparison to the national average, giving carriers and brokers an idea of which lanes to gravitate toward or avoid.

“The transpacific ocean rate slide slowed this week as prices to the East Coast stayed level, [which] could be an early sign that the recent increase in canceled sailings by carriers is starting to have an impact on rates,” said Judah Levine, head of research at Freightos.

Spot market rates from Columbus, Ohio, to Elizabeth remain elevated at the end of October, dropping only 3 cents since Oct. 1 to $3.39 a mile — 89 cents above the national average.

Outbound volumes from Columbus are up 6% this week. While truckload volume in Elizabeth is still booming from a boost in imports, now would be the time to capitalize on the elevated rates being offered with a good chance of booking a load afterward.